User registration is disabled in this demo.

Please enter your username or email address. You will receive a link to create a new password via email.

The Greenman’s grand-nephew is a great quarterback!

In Newport, I always say there are two degrees of separation between you and anyone else (yes, even Kevin Bacon).

Two degrees puts me in contact with the star quarterback for a Pac-12 team – Justin Herbert.

This is Barb and Ken’s grand nephew!

To be honest, I don’t know much about football. However, I know he has to be good if they are already mentioning him for a Heisman Trophy candidate and top draft choice. Guess it’s in the genes. Barb’s oldest brother, Rich Schwab, was a football fanatic and played for the University of Oregon too. He was like a big brother to Ken (who definitely has the addiction too.)

Ken and Barb are very proud of Justin, and not just for football but for his interest in the field of medicine too. Sadly Rich passed away before he could see his grandson’s stellar year. I feel the Greenman’s grief from blocks away. They miss Rich deeply. Even not knowing Rich, I’m very confident that he’s proud of his grandson.

We’ll need to keep an eye on this one, he might even make me a football fan for the season. 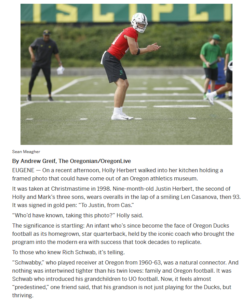 Getting to know Newport, Oregon in 8 minutes 24 seconds

LOTS of Potential In the Heart of Newport

Winter in South Beach is amazing. I barely wear a jacket. Having spent eight years in Wisconsin, I...

Growing up in Indiana, I've been down with nature most of my life. I grew up in a very small...